It was a proud day for members of the Rotary Club of Knights Pendragon to be included in a triple celebration at NSRI Station 25, Hartebeespoort Dam, on Sunday 25th February 2018. The celebrations included the 50 year anniversary of the founding of the NSRI, the opening of the new Boathouse and the re-dedication of the rescue boat, Rotary Endeavour, recently relocated from the Western Cape.

Proceedings were well attended by the station crew, the NSRI CEO Cleeve Robertson, members of the Transvaal Yacht Club (at which premises NSRI Station 25 is based), members of the Rotary Club of Knights Pendragon, friends and family.

In recognizing the 50th Anniversary of the founding of the NSRI, Captain Little, formerly of the Society of Master Mariners eloquently shared his memories of the meeting at which the decision to found the South African In shore Rescue Service, soon thereafter to be known as the National Sea Rescue Institute, in 1967 was made. This decision being strongly supported by the Society of Master Mariners who were being called on periodically to do sea rescues in the absence of a dedicated service. 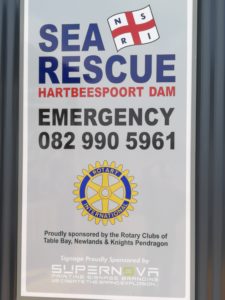 For the Knights Pendragon Rotarians, seeing the excellent job the NSRI Station crew have made of building and fitting out the boathouse, was particularly pleasing. This because the money for the boathouse was raised through the annual wine auctions organised by the Rotary Clubs of Table Bay, Newlands and Knights Pendragon  in both Cape Town and Gauteng in recent years. 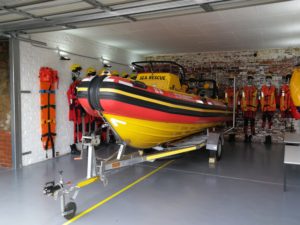 The need to store the stations expensive, but essential rescue equipment and rescue boat in a safe, clean and dry, but readily accessible facility, is paramount in ensuring the crew are able to rapidly respond to calls to assist those in distress on and in the water.

It was also good to see the boat, Rotary Endeavour, recently relocated from the Western Cape, in excellent condition and ready for service, a demonstration of which we were treated to by NSRI Station Commander Michael Saunders and his crew.

With Rotary Endeavour, the crew’s protective gear and rescue equipment safely stored and at the ready, those using the waterways of the Hartebeespoort dam can draw comfort in the knowledge that the skilled and experienced crew of their local NSRI Station, are close at hand should they ever find themselves in difficulty in or on the dam.

A member only meeting Please advise Executive ...
View All